The "Volksbühne" is occupied - you can read this in the newspapers and in the internet. Many people gather in front of the Volksbühne. What is happening? Not so much. If you look at pictures in the newspapers you will often see a young man, a travelling artist: He blows giant soap bubbles. (I get to know him too, because my backpack hits the full beer bottle of his girlfriend. I was very sorry.) Two occupiers leave the building at about 13:00 and talk to the people. It is impossible for me to hear anything because they do not use a microphone. Later the police will carry the occupiers one by one out of the building. Chris Dercon had made a proposal to the occupiers: they can use the green room for their cultural programme. But the occupiers were tired and did not agree. And the next day there was no longer a proposal. 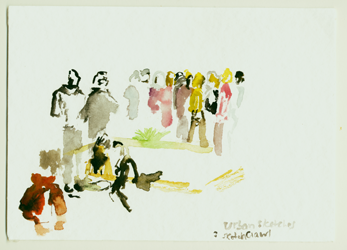 Now there are some tables in front of the Volksbuehne Berlin. Some people sit there.
Aquarell 17 x 24 cm: Kirsten Kötter